For our last week of our series on painting spring greens today, I chose a spring landscape photo that was shot later in the spring. The landscape had greened up some more compared to the ones we painted earlier in this series. However, the grass still lacked the deep, rich greens that come later in the summer, and trees still weren't completed filled out with their foliage.

We still had lots of green to contend with, though. And when that's the case, I treat it like a big balancing act between warms and cools, and pay close attention to the values.

I wanted to create depth between the foreground/middle ground bushes and the taller trees further back. To do this, I used cool hues and lighter values (cooler and lighter than what my photo was telling me) in those distant trees, and established the cool color temperature right from the start in the underpainting. Contrast between soft and hard edges helped here, too. And even in the areas more toward the foreground, I still needed to balance the warms and cools. Since the sunlight was hitting the ground more that the bushes, with the bushes only getting skimmed with light, I used subtle shifts in warms and cools in the bushes (without too much value contrast) to indicate which areas were in light and which were in shadow.

The values of the foreground/middle ground bushes compared to the ground was a tricky area. In an effort to  depict the highlights on the bushes, it's tempting to make those highlights lighter than they are. But I needed to pay close attention to the fact that the LIGHTEST areas of the bushes were still DARKER than the ground.

Below are some progression shots, starting with my initial block-in and the alcohol wash underpainting... 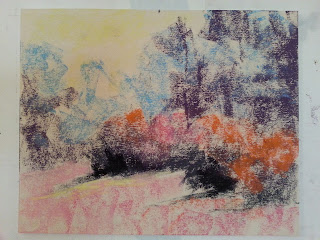 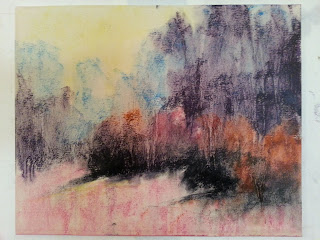 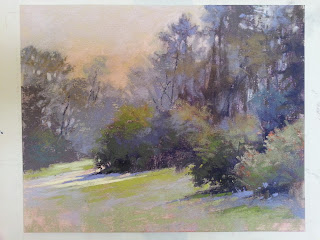 Posted by Barbara Jaenicke at 1:14 PM