Marsh Reflections is based on the minimal stroke exercises I did in my pastel classes this week. I had students count their strokes on a couple of different painting exercises.

In 20 Strokes or Less...
We first warmed up with a painting of a single apple.  I didn't set up any apples in the studio, though, since the idea wasn't to copy what the apple looks like, but to create the form of an apple using as few strokes as possible.  We just did it out of our head.  After an initial sketch using a dark NuPastel, we chose about 4 pastels of different values and created the image using no more than 20 strokes.

In 100 Strokes or Less...
For the remainder of the class we did several 5 x 7ish studies of a marsh landscape scene (from a photo) using the same idea.  For this, we aimed for 100 strokes or less.  The idea here is to get the most mileage out of every pastel stroke, without going back over each area with additional, unnecessary strokes.  Basically, we want to say more with less.  We found that we needed to think a bit more about how to hold the pastel, how hard we wanted to apply the stroke, and in what direction we made the stroke. 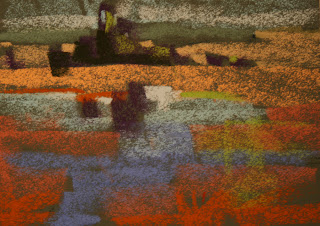 When I painted Marsh Reflections (at the top of this post), I didn't count each stroke as I did with the studies I demonstrated in class.  And since it's a larger, finished painting, it certainly went beyond 100 strokes.  But I was careful to lay each stroke down and leave it alone, just as I did with the studies, avoiding the temptation to constantly correct, perfect, and rework.  Not only does it force you to avoid putting down too much pigment, often resulting in a muddy look, but it also encourages you to edit out details that don't add any value to the painting.  Although some paintings do need careful corrections and reworking, I've found that ultimately, the less said (or in this case, "painted") the better!

Posted by Barbara Jaenicke at 12:40 PM